What Does the Hobby Lobby Decision Mean? 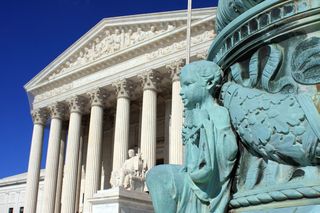 What was the argument?
The Affordable Care Act (ACA) requires employers to provide healthcare that covers all forms of contraception at no cost. Two private companies, Hobby Lobby and Conestoga Wood Specialties, had no problem with the majority of the contraceptives mandated by the law but were not willing to offer coverage for emergency contraceptives, like Plan B, and other abortifacients. They argued that the ACA violated their rights under the Religious Freedom Restoration Act, passed in 1993, which prevents laws that substantially burden a person’s free exercise of religion.

What was the decision?
By a vote of 5-4, the Supreme Court ruled that “closely held” businesses don’t have to comply with the ACA’s requirement to offer contraceptive coverage as part of their health plan if the coverage violates the owner’s religious views.

Why is it important?
The decision upheld the Religious Freedom Restoration Act (RFRA), but for the first time, the court stated that this right is now extended to for-profit corporations. From Legal Analyst Stuart Taylor:

“And in a very detailed analysis of the various steps you go through under this law, first, can you invoke protection at all if you’re a for-profit corporation. The court said yes. Then, does it substantially burden your religious exercise. The court said yes, because these companies have objections to providing contraception coverage, and then they go on and say is this the government’s least restrictive means they could use to serve the need of the women who want the contraceptives, in this case. And the court said no; they have other ways they could to it. The government could pay for it or they could use an accommodation they are already using for nonprofit religious employers.”

Does this apply to all companies?
The Court’s decision applies to “closely held” companies, basically defined as those that aren’t publically traded and have the majority of their stock owned by an individual or small group of individuals, such as a family. At the same time, there’s nothing in the wording of the decision that limits the type of company that can bring a claim based on the RFRA. The problem for these larger companies that have dispersed ownership is that they’ll have to prove that all owners or shareholders share the same religious purpose needed to have a legitimate objection. Therefore, although it’s possible, the hurdles these larger corporations will face would likely be insurmountable.

What does this mean for employees?
If an employer opts out of covering contraceptives, employees can still opt to purchase them directly through a retail outlet, but they wouldn’t be covered by their insurance plan. This means costs would most likely be higher than what they previously paid under their insurance plan.

More specifically, religious nonprofits can opt to leave contraceptive coverage out of their insurance plans. The insurance company is then required to offer and pay for separate policies for female employees who want free contraceptives. The logic is that this same arrangement will be extended to for-profit companies that act similarly.

Does this mean that privately-held companies can now opt out of other requirements of the ACA if they find it religiously objectionable?
Justice Alito’s and Justice Kennedy’s concurring opinions repeatedly stress the narrow scope of the decision, stating the ruling only applies to contraceptives, not any other health services that might face religious objections. The Court limited the decision to contraceptives alone because there’s already an accommodation in place for the aforementioned religious nonprofits. There’s no such accommodation or alternative in place for any other service required by the ACA.

However, it’s certainly possible for applicable business owners to object to other services (blood transfusions, chemotherapy, psychotherapy drugs, etc.) that go against their specific religious beliefs. Because of this, in the future, we may see business owners trying to make cases that they should be allowed to exclude such services.

For over 75 years, the divisions of USI Affinity have developed, marketed, and administered insurance and financial programs that offer affinity clients and their members unique advantages in coverage, price, and service. As the endorsed broker of the Pennsylvania Bar Association and more than 30 other state and local bar associations, and with more than 30,000 attorneys insured, USI Affinity has the experience and know-how to navigate the marketplace and design the most comprehensive and innovative insurance and benefits packages to fit a firm’s individual needs.